Two months into their journey to the United States, he and his wife are sleeping most nights in an old, worn Nissan.

Salamanca had no family or business contacts in the U.S. No property he’d purchased on a previous trip. No idea where the children might attend school.

“Once we started getting threats, we couldn’t take it anymore,” he said of the family’s last days in Venezuela.

Early waves of Venezuelan immigrants who fled after the late President Hugo Chavez and his socialist government came to power in 1999 came largely from the upper class. They had abundant savings and vacation homes in Miami to turn into permanent residences. These days, Miami’s large Venezuelan community is filled increasingly with those from the middle class.

They are small business owners like Salamanca. University students and professors who came to teach or attend school and decided not to return. Athletes like Valentina Rodriguez, a gymnast who arrived with her family in February and didn’t even have money for a bus ride from Miami International Airport.

All had the means to obtain visas and travel to the United States. But they are arriving with a financial cushion that is considerably less secure.

“Before people would come, study and go back,” said Manuel Gomez, a law professor at Florida International University. “And people weren’t willing to sacrifice their social and professional status for a lesser life. People wouldn’t be willing to live in a small condo and share a car, whereas now it seems that people are willing to do that.”

The contrast has come to the fore in recent weeks as protests erupted throughout Venezuela over a long-brooding list of woes: Food shortages, soaring inflation, and a heavy-handed government that has shut off spaces for dissent. At least 18 people have been killed.

Immigration attorneys who work in Miami’s Venezuelan community said they have been flooded with inquiries from families seeking political asylum or wanting to find a way to try and get their relatives out. Most are middle-class families with limited finances.

Venezuelans have immigrated to the U.S. in several notable waves. Some fled early during Chavez’s first presidency, and a second exodus occurred after the 2002-03 oil strike, during which Chavez axed 18,000 workers, from mechanics to executives, from the state oil company. There are now almost a quarter million Venezuelans in the U.S., nearly half of them in Florida.

The largest concentration resides in the Miami suburb of Doral, where businesses, luxury condos and gated communities sprung up to cater to the growing Venezuelan community.

The violence and demonstrations in Venezuela over the past three weeks haven’t yet provoked a new surge in migration to Miami, but there has been a slight increase in the number arriving in Florida. Some 19,800 Venezuelans arrived at Miami International Airport between Feb. 15 and 28, up from the 18,500 who arrived during the same period in 2013.

Those who are coming reflect the shifting demographic of Venezuelans choosing to start over in a foreign country and the deteriorating conditions they are fleeing.

Francisco Angulo, a broker and the residential president for the Miami Association of Realtors, said the first Venezuelans to settle in Miami after Chavez purchased homes with extra, disposable funds. In the past four years, however, more are buying with money from whatever they could sell before leaving Venezuela.

Venezuelans still remain the top international buyer in Miami, but their share of the market has declined, from 28 percent in 2010 to 14 percent in 2013.

“They don’t have savings,” he said. “And they have to come and work to survive.”

He said these immigrants are settling in apartment complexes and townhomes outside of Doral, in communities like Kendall and Homestead.

“They’re not the fancy buildings people are seeing on TV,” Angulo said.

Salamanca, 54, and his wife, Mercedes Olivares, 42, are from Villa del Rosario, a town in northwestern Venezuela with a large cattle and farming industry. Salamanca ran the business his father started, selling oxygen and other gas tanks. Olivares was a teacher.

Salamanca initially supported Chavez. He liked his promises to uproot corruption and help Venezuela’s poor. But then Chavez began expropriating farms and businesses. Crime rose and inflation soared. Salamanca said he grew disenchanted and signed up with an opposition party.

The move proved costly: Salamanca said he lost about 40 percent of his contracts with government-run hospitals. His only remaining clients were private clinics.

The family began receiving threats by phone, morning and night, they said. Olivares lost her teaching job. She was told there wasn’t funding, but said she was part of a group fired and replaced with teachers all supportive of Chavez’s hand-chosen and narrowly-elected successor, Nicolas Maduro.

The family had tourist visas from a trip they took in 2013. Fearful for their lives, they bought tickets and left nearly everything behind.

“Those who were the first to leave, they planned,” said Patricia Andrade, human rights director for the Venezuelan Awareness Foundation, a nonprofit organization in Miami. “They knew which neighborhood they would live in, which schools their children would go to.”

Arriving in Miami, Salamanca bought the beat-up car with discolored gray seats for $1,000. He also put down $2,400 in deposit and the first month’s rent on an apartment.

A month into their stay, Salamanca and Olivares decided they could no longer afford the apartment. With tourist visas alone, they couldn’t find work. They began sleeping in the car.

“It stressed me so much to see my children sleeping in the back of that car, uncomfortable, in the heat,” she said, her voice flush with frustration.

Olivares and Salamanca are pinning their hopes on a push by lawmakers and the Venezuelan-American community for President Barack Obama to grant asylum to those fleeing violence in Venezuela and expedite asylum requests.

Asylum is usually difficult to obtain. Threats alone are considered harassment and insufficient for getting approval, Green said. But the number of Venezuelans granted asylum has risen from 393 in 2009 to 969 in 2012.

Olivares and Salamanca, meanwhile, are relying on the generosity of a few newfound friends.

One family lets the couple’s two children spend the night, and sometimes Olivares and Salamanca stay as well. Some days, they manage to make a small amount of money. Salamanca made empanadas, a meat-filled pastry, and sold 40 for $1 each. Olivares made $80 washing cars and is considering renting a hot dog cart, though he has nowhere to keep it overnight.

On a Wednesday afternoon, they crisscrossed Miami in the Nissan, seeking work.

Four blocks from their destination, they ran out of gas. They pushed the car into a parking lot and walked to a friend’s office. He lent them $20. Salamanca filled up a canister with gas at a nearby station. When they got back to their car, he struggled to get the gas into the tank, a small stream leaking onto the floor.

His wife grabbed a white rag and held it near the tank, trying to stop drops of gas from slipping out of the can.

When he got into the driver’s seat, Salamanca turned the key. The engine sputtered but didn’t start.

He sighed, his eyes rolling in despair. Then he turned the key again. 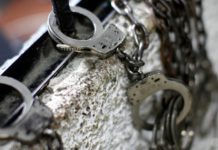 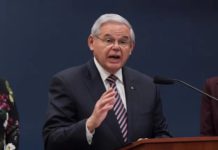 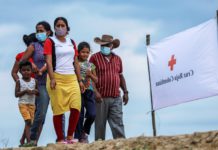 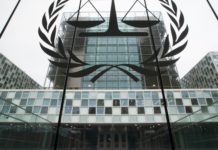 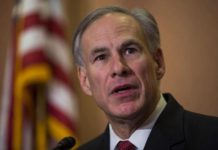 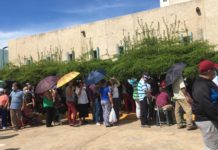