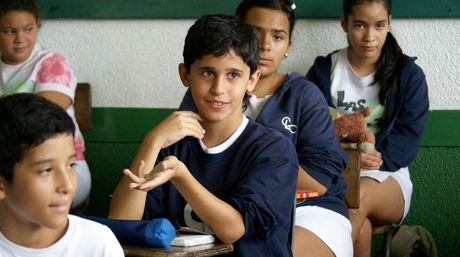 The long struggle of “my children do not get”

Resolution 058 is not an isolated case: since 1999, through various laws and other official documents, the government has tried 18 times to change the concept of education in school introducing the precepts of the People. Civil society has rejected interventions and won many battles. But the idea persists in Executive

Since 1999, the Government has taken the pitcher to the fountain again and again, the same concept repeated photocopying: the school should be the center of community endeavor. Last month, the topic came packaged in resolution 058 that creates the education councils in schools, replacing body held companies decision to parents and guardians.Something similar to what happened with the neighborhood associations, which were supplanted by the community councils.

The lawyer Ricardo Antela, professor of constitutional law at the universities Metro Andrés Bello, has studied all the documents issued by the office of education in the fourteen years of the mandate of Hugo Chávez and something becomes clear: “The government has always had the intention incorporated within the educational community to various community actors in leading roles of school management. ”

Stresses that the risk is that schools are converted in the first link of the People. “Under this set-states-must comply with the legal framework of the People and sticking to your goals, purposes, objectives and methods of organization, defined very clearly in the seven laws of the People: building a socialist society and promoting socialist ethics”.

Escuelas.Technological Rodriguez, PhD researcher in Education from the Universidad Central de Venezuela, also ensures that the basic idea of resolution 058 has been present in many documents and legislation.“The problem is that it is proposed that the school community to help strengthen it as an institution that seeks to achieve educational goals, but will be used by the community for other actions, such as failing to have training center for children “he says. This shift in priorities and functions concerned because he believes that schools are very weak Venezuelan and this further diminish their educational task.

Olga Ramos, educational public policy expert and coordinator of Educational Observatory of Venezuela, is concerned that the current mix of state, government and party “intends to use education as a space for the training of future ‘militants’ or supporters “. He added that the National Plan of the name left to become an instrument thrust of “socialism” and what the government calls the “Bolivarian doctrine” as a model country. “That’s why, when the laws, rules and educational programs referring to the National Plan, with the name given today, my review is the content of the plan,” he says. The risk for all of these experts is an education project to serve the country framed laws of the People, more than that is enshrined in the Constitution.

Education Minister, Maryann Hanson, has made no secret that this is the intention. AVN ratified on 4 November that the resolution 058 was developed as part of the new concept of state. “This resolution does is build popular power from the schools and that gives him a very valuable role to communal councils, which have a constitutional right to participate in this process,” he said.

Deputy Xiomara Lucena PSUV deputy (who was director of Educational Communities, Ministry of Education) supported the resolution: “It is in line with the political model of this country, which is participatory democracy.”

But the criticism has not been long in coming. Foundation President Arturo Uslar Pietri, Ecarri Antonio says that, beyond improving the quality of education in Venezuela, the resolution makes public school official ever more anarchic and bureaucratic. Therefore considered an “enemy of the popular school.”

Given the public response on the measure, the minister had a first meeting with the Network of Parents and Representatives and announced his willingness to listen and modify positions. However, the essence behind the 058 continues in other laws.