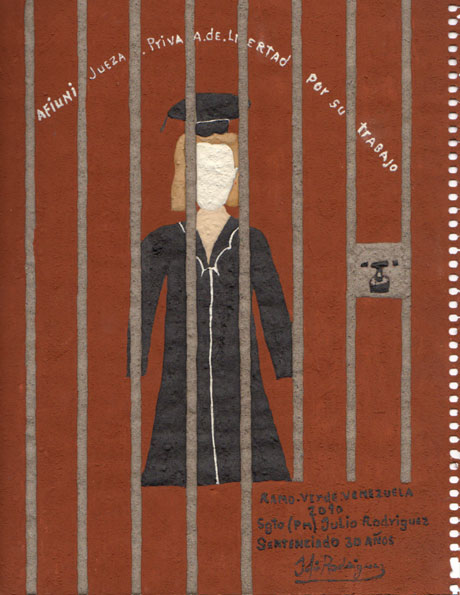 The International Bar Association’s Human Rights Institute (IBAHRI) has
today written to the Venezuelan authorities urging them to take
immediate steps to release Judge María Lourdes Afiuni from house arrest.
In an open letter, addressed to President Hugo Rafael Chavez, the IBAHRI
also expressed deep concern over the multiple violations of due process
and judicial guarantees in her case, as well as the severe negative
impact on the independence of the judiciary and the rule of law in
Venezuela.

The Venezuelan Government recently extended Judge Afiuni’s house arrest
by two years after transferring her in February 2011 from the inhumane
conditions of the National Institute of Feminine Orientation (NIFO)
where she had been incarcerated since December 2009. The IBAHRI
considers the detention Judge Afiuni to be arbitrary and the conditions
of her house arrest to be non-complaint with the Venezuelan Criminal
Procedure Code and the UN Standard Minimum Rules for the Treatment of
Prisoners.

A detailed IBAHRI report, Distrust in Justice: the Afiuni case and the
independence of the Venezuelan judiciary , found that the case of Judge
Afiuni exemplifies the lack of independence of the judiciary in
Venezuela and the external pressures to which judges are subject. On
national television President Hugo Chávez referred to Judge Afiuni as ‘
una bandida’ (‘a bandit’) and stated that her case should be an example
to other judges. Unfortunately, during the fact-finding mission to
Venezuela, the IBAHRI delegation heard on several occasions from legal
professionals that ‘ Nobody wants to be the next Afiuni ’.

‘We are gravely concerned about the on-going detention of Judge Afiuni
which represents a serious threat to the independence of the judiciary
in Venezuela’ said Sternford Moyo, IBAHRI Co-Chair. He added, ‘This case
not only undermines public confidence in the administration of justice
but deprives Venezuelans of the legitimate expectation to live in a
democratic society under the rule of law’ .

Judge Afiuni a titular judge was imprisoned in 2009 following the
release of Eligio Cedeño, a businessman and banker. Judge Afiuni granted
bail to Mr Cedeño after two years of pre-trial detention, applying
provisions of the Venezuelan penal code and taking into account a
decision of the UN Working Group on Arbitrary Detention that considered
the individual’s detention unlawful. Following bail he fled to the
United States.

Click here to view the open letter to President Chávez of Venezuela.

Click here to download the IBAHRI 2011 report Distrust in Justice: the
Afiuni case and the independence of the Venezuelan judiciary .